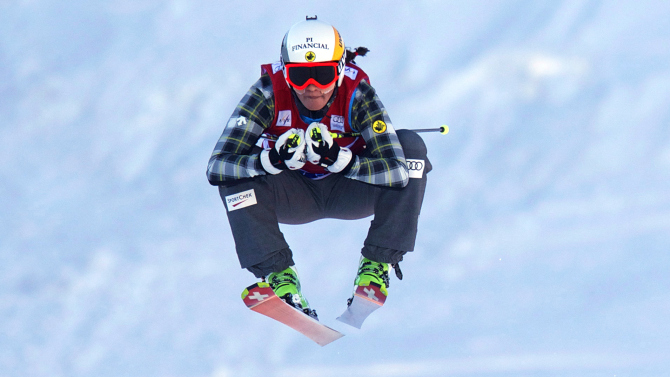 At Sochi 2014, Marielle Thompson ensured that the women’s ski cross gold medal remained in Canada’s hands. After winning her round of 16, quarter-finals and semi-final, Marielle defeated teammate Kelsey Serwa in the grand final to create Canada’s third gold-silver double of the Games. Since her debut on the World Cup circuit in December 2010, Marielle has established herself as one of the world’s biggest ski cross stars. She was only 19 when she won her first World Cup gold in February 2012 in Blue Mountain, Canada. She ended the World Cup season with six podiums, including three wins, as well as the overall title of the Women’s Ski Cross World Cup.

She made history as the first Canadian athlete to win a crystal globe in ski cross. Her 2012-2013 season started slowly, but Marielle made up for it before the end, winning a silver medal at the Sochi World Cup which served as a test event for the Olympics. She went on to win the silver medal at the 2013 FIS World Championships, securing the presence of a Canadian on the ski cross podium for the third consecutive year. At 20, she was still eligible for the 2013 FIS World Junior Championships, and won the gold medal there. In the 2013-2014 season, she won her second crystal globe thanks to her six podiums in eleven competitions, where she never placed below the top 5.

Marielle took part in just three World Cup competitions in the 2014-2015 season, but she won them all. She then suffered a knee injury at the World Championships and had to interrupt her season. She returned to the World Cup circuit in the fall of 2015 and finished 2 nd thererank of the general classification with its four victories. Marielle won her third Crystal Globe in the 2016–2017 season with her seven wins in 13 starts. She brought her total victories to 20 and her podiums on the World Cup circuit to 31. In mid-October 2017, Marielle tore her anterior cruciate ligament and medial lateral ligament in her knee while falling during a training run in Switzerland and then underwent surgery. Despite her absence from competition for the months that followed, she was still selected for the PyeongChang 2018 Games team. In her first race after her injury, she had her fastest time in the rounds. Olympic qualiication, but was eliminated in the round of 16.

Beginnings: As a child, she skated and skied. She started skiing at the age of 2. She started competing at 11 and ski cross at 16. Beyond Freestyle Skiing: Enjoys cross-country biking, hiking, and water skiing. When she has time, she works as a skating host at the Whistler Arena. When she was little, her idol was Canadian skier Britt Janyk who is also from Whistler. She’s not particularly superstitious, but throws salt over her shoulder if she spills the salt shaker, and she avoids going under the ladders. She attended the Vancouver 2010 ski cross events as a spectator.