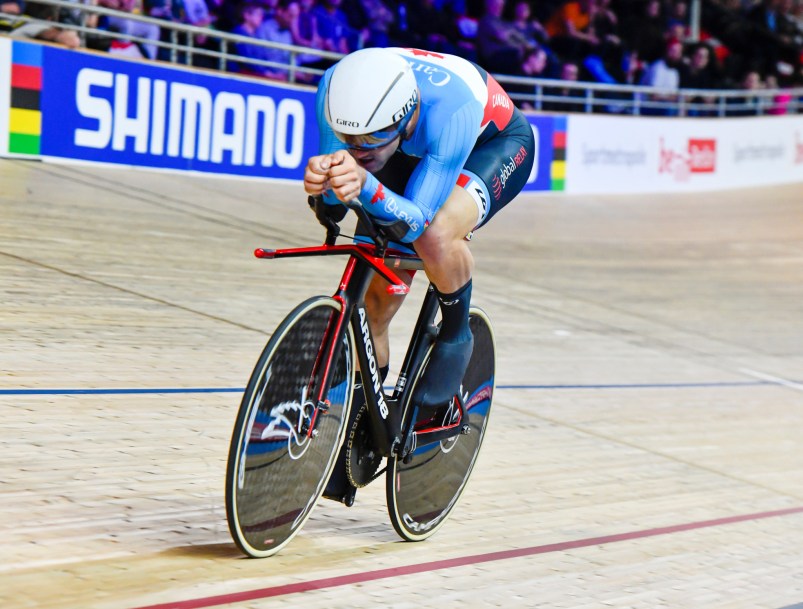 Vincent De Haître is an athlete of two sports, representing Canada internationally in speed skating and track cycling. Already a double Olympic Winter Games in Sochi 2014 and PyeongChang 2018, he participated in his first Summer Olympics in Tokyo 2020.

De Haître kicked off at the Olympic Winter Games four years ahead of schedule after winning the 1,000-meter event and placing third in the 1,500m at the Canadian Speed ​​Skating Trials. He finished in the top 20 in the 1000m at the Sochi Games and was named Speed ​​Skating Canada’s Rising Long Track Star of the Year. At the time, he had very little international experience. He finished seventh in the 1,000-meter and 10th in the 1,500-meter at the 2013 World Junior Championships and made his debut on the ISU World Cup circuit in the fall of 2013.

In the summer of 2014, he competed in the Commonwealth Games, his first major international track cycling competition, where he placed fourth in the team sprint and seventh in the 1000m time trial. The previous season, he had won the national title in the 1000 km time trial. In September 2014, he lowered the Canadian record in the 1 km time trial at the Pan American Championships.

Returning to speed skating, he captured his first World Cup medal in March 2015, a bronze medal in the 1,000-meter World Cup final in Erfurt, Germany. This only happened after competing in his first World Single Distance Championships. De Ha î tre was back in the saddle during his offseason of skating in 2016, once again winning the 1 km event at the Canadian Championships.

He concluded the 2016-2017 speed skating season with a second place overall in the World Cup 1,000 meters, with his first individual victory on the World Cup circuit in Astana, Kazakhstan in December, then a silver medal at the World Cup final in Stavanger, Norway in March. These accomplishments earned him the title of Long Track Athlete of the Year from Speed ​​Skating Canada.

With a focus on qualifying for the 2018 Olympic Winter Games, De Haître won his first ISU World Single Distance Championships medal in 2017 by securing silver in the 1,000m. The next day, he finished at the foot of the podium in the 1500m event with a fourth place. At the ISU World Sprint Championships in late February, he rewrote the Canadian 1000m record.

After competing in the 1000m and 1500m at PyeongChang in 2018 despite a serious heel injury that hampered his performance, De Ha î tre turned his attention once again to his journey to the Summer Olympics. He won three silver medals at the 2018 Canadian Track Cycling Championships and again set a Canadian record in the 1km time trial at the 2018 Pan American Championships. He made his World Cup debut in the UCI in autumn 2018.

De Ha î tre had a breakthrough season in 2019-2020. He was part of the gold medalist team pursuit squad at the 2019 Pan American Championships, he won the national title in the 1km time trial, and he contested his first UCI World Championships by taking fourth in the 1 km time trial. At Tokyo 2020, he was a member of the men’s team that finished fifth in the team pursuit, Canada’s best Olympic result in that event since 1932.

Beginnings:  He started speed skating at the age of six after skating with his neighbors on ice rinks open to the public… He gave up the sport at the age of nine to try downhill skiing , before realizing how much he loved skating… He started to compete for fun in cycling at the age of 16… Other Interests:  He dreamed of becoming a race car racer, but he said he had a more realistic ambition.  » be a firefighter or trainer / owner of a gymnasium… He enjoys Nordic skiing, camping, playing pool, watching movies, playing car racing simulation games and tinkering on his various bikes… He studies in sight of obtaining a Bachelor of Arts … Odds and Ends: He has traveled to all of his training camps and competitions with the same Canadian flag since 2014 and he hangs it where he sleeps so that it is the first thing he sees when he wakes up… His Olympic dream was born the day he saw Catriona Le May Doan promoting the Vector product in a commercial break during Salt Lake City 2002 … We nickname him « Quadzilla » … Favorite motto: Going back up the hill will reach the top as quickly as possible …